Spring is obviously the worst season, although most people might think the opposite. You might hear such nonsense as, “Look at the flowers!” “Can you smell the fresh air?” “Isn’t spring wonderful?” Those people are morons.

They are the kind of people who like ties in sports because no one loses. They are the kind of people who say things like, “I like Taylor Swift’s early stuff.” They are people who see the ocean waves but forget about the depths below. Spring is an imposter. Those beautiful flowers are actually pollinating the air with their allergenic babies that destroy our sinuses. That lovely, fresh air is actually fully polluted with the dust from northern China (in America, it’s possible to have fresh air, but spring air is no less fresh than the actual best season—fall). So, no, spring isn’t wonderful. I’ll explain.

Spring is actually winter in disguise. Spring is not the season of growth and renewal. Spring is an imaginary line, set between the brutal despair of frozen winter and the blazing summer, and it only lasts for about twenty days in May. March is so obviously still winter it demands no argument, did you ever wear shorts in March, or have a picnic in March? OK. April is debatable, but the cold rains of the first weeks can actually turn into snow at times—not a favorable weather pattern. The end of April can be nice, but again, the pollution and pollen will just play havoc on nostrils if you risk going outside without a mask. (To be clear, I’m living in Asia, other springs may be some bee buzzing, clear, breezy utopia that I’ve forgotten about, but not here in South Korea.) May is known as the Queen’s month in Korea. I’ve got no problem with May, skies clear up, pollution crawls back to China, the trees bloom with a cheery poise and summer starts to roll in. If March and April were like May, spring would be a parade of merriment and joy. People skipping to work in Bermuda shorts and pointing their noses toward the retreating Jack Frost. But it’s not, and spring has fooled us all into loving it.

Spring is also when the SAD (seasonal affective disorder) people start dusting off the walking shoes and oiling up the bikes and shaking out their spring jackets, you know, basically getting in my way. I’ve been riding my bike to work, bundled up in layers, red-faced through the Siberian winds all winter long. I enjoy my solitude on the bike path. Now all the spring walkers are out on the path pointing distractedly at the pretty blossoms, walking in a dreamily preoccupied state not understanding that this is my trail and they just walk here. Then you have the bikers. Many with the same affliction of Korean hikers, namely, bright, expensive gear. They’re flying past me with luxurious bicycles that you’d be insulting by calling a “bike.” They only bother me because where were they all winter? Plus, I’m guilty of all seven sins every day, so they provide my envy an outlet. Then we have the slow basket bikes, the rented cruisers, the tandem riders, the ride a bike in a dress because I must be a lady at all times folks. I’m not even mad at them, they’re out for a good time, just stay in a straight line you bums. The other day, one of them swerved almost right into me, I avoided the crash by turning right into an empty pilon hole. Flat tire. I know, my fault you say; I disagree and point you back to above where I made clear this whole riding trail is mine. (If Steven from Braveheart can have all of Ireland, I’m allowed my 14km stretch to be clear of goobers. We all feel this way with something so familiar. Don’t you see the same people or the same cars on your daily commute and feel something akin to camaraderie through misery with them? But when some stranger bolts in, they must be disclosed as frauds and removed.)

Next, we have the activities associated with spring. What sport begins in spring? Baseball. Yes, the most boring of all big four sports, the sport that is so long and slow, it IS possible to see grass grow before the 7th inning. I love baseball, yet I cannot dispute its dull repetition. But it is, just like spring, an imposter. Somewhere, somehow, some marketing genius called it the national pastime solidifying its place in American leisure. Yet, football, basketball and hockey, in that order, are much closer to national pastimes. What are you more likely to see in a park: some people tossing a pigskin, maybe shooting hoops or two men wearing baseball gloves and Oakley shades throwing a baseball?

Winter has snow sports, sauna time, hot soups, big jackets and warm socks. Summer has swimming, tanning, ice cream, flip-flops and sunglasses. Spring has raincoats, galoshes and cherry blossoms. Sweet; thanks, no thanks. What food goes with spring’s half-assed weather? It could be cold and rainy in the morning and sunny and hot by noon or vice versa! It’s unpredictable, and that is the least fashionable thing for weather to be. At least in the extremes (i.e. winter and summer) you know what’s coming the next day. Cold or hot, possible precipitation in a form corresponding to the extreme, but none of this freezing rain crap you get from April.

Spring is an in-between time with which my sensibilities simply do not jive. I enjoy room temperature water, mildly spicy things and action movies without too much explosions. Spring should match me, but it doesn’t because it’s not actually a medium sized season. It’s all four seasons mushed into three months! In any given spring, look at the daily temperatures. I promise you will see a winter bite, a summer laze and a fall wind in there. How can one season have them all?! You ever see snow in summer or sunburn in winter? No, because they aren’t bipolar annoying seasons.

You might be saying, “What about fall, that’s an in-between season? Don’t you hate fall?” And you my friend, would be wrong and probably like spring. Fall is the best season for so many reasons. Fall is the reminder of the brevity of our lives. But it doesn’t do it in a slap you in your face way with the bloom of spring—ostensibly telling you that you are not young and beautiful anymore like this flower. Fall shows you the beauty of getting old. Fall shows the colors of life, the boundless radiant cool of middle age before finally giving in to the inevitable winter. Fall smells like happy nights by a fire. Fall has pumpkins and apple cider and seemingly invites you to have a whiskey and a pot pie. Spring smells like that lady who wears too much perfume on the elevator. Yeah, it smells good, but it’s too much hon. (Spring does have baby chicks and ducklings, I can’t avoid admitting that’s a great thing.) Fall has football! And, should I remind everyone who the Super Bowl Champions were in 2018? It’s the Philadelphia Eagles. Praise be to Foles.

September is like an extended summer month. The best month to go to a Korean beach is September. The crowds are gone, the water is warmed from the August sun and the nights are cool and lovely. October is my birthday, excellent, plus Halloween, the most random and bizarre night of the year. Then you have quiet old November. He don’t bother nobody. In fact, old November delivers the greatest day of the year—Thanksgiving. A holiday so perfect we tend to forget how great it is by focusing on how stupid Black Friday is. In Korea, Thanksgiving is a buffet at a pub, starch heavy, but still good times with friends. Also, the best street food of Seoul comes out in fall. Cornbread filled with an egg, roasted chestnuts and fried dumplings really hit the spot on a chilly fall day.

Spring is presumptuous. Always telling you to get outside. I don’t appreciate such advocacy by a season. “You’ve been inside all winter watching Netflix and eating chocolate, haven’t you? Well, now that spring is here, you have to go outside and do something! But bring a jacket because I’ll be freezing by sundown even though you were sweating an hour ago. Have fun with that spring cold that will inevitably come.” Summer doesn’t need to ask. The sun calls you out like when Bugs Bunny used to smell something nice and floated away on the tendrils of the food smoke. I don’t need your help to get outside spring. I’m not finished watching Westworld yet.

If, after all this, you still don’t believe me about how dumb spring is; three words that will only mean something to Americans, “Daylight Savings Time.” 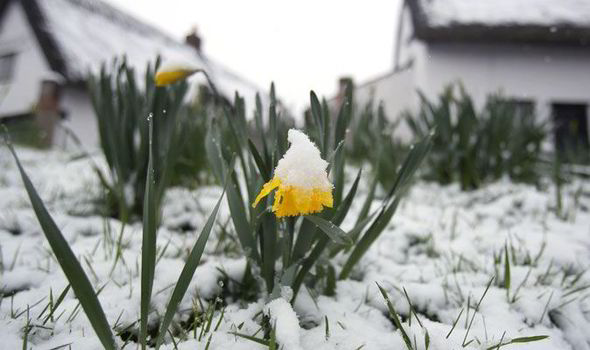