I didn’t cry until I heard Merrill Reese, the longtime radio voice of the Eagles, on YouTube the day after the Super Bowl. His call of the Tom Brady fumble with two minutes left in the fourth quarter pushed the release button. The emotions, the memories, the Sundays, the halftime catches in the backyard, the Monday mornings discussing the game, the plastic cups and t-shirts emblazoned with a mean green eagle, the cheesesteaks, the fireplace and TV on cold winter afternoons, the time with my family. Three generations watching our beloved birds struggle toward the excellence other teams seemed to stumble into.

My grandfather watched the Eagles beat Lombardi’s Packers in 1960, my dad was at the Spectrum in 1974 and ‘75 to see the Flyers win the Stanley Cup and I was born during the Phillies World Series win in 1980. Philadelphia sports are passed down through the generations, with a gypsy’s curse, feeling as though some invisible hand always pulled any success away from our teams. The Flyers of the 80’s couldn’t beat Gretzky’s Oilers, the Sixers couldn’t beat Shaq and Kobe, the Phillies beat the weak Devil Rays in 2008 to break that gypsy curse, but then lost to the hated Yankees the next year. Leaving the Eagles who tried to beat the dynastic Patriots of the early 2000’s and fail.

The website fivethirtyeight.com showed that the Eagles have the lowest rating of championships to expected championships. Basically, we field good teams, then lose.

The 2017 Eagles, led by the talismanic QB Wentz all year before popping in our backup with three weeks left in the season, a stout defense, a monster O-line, three runners—a bruiser, a shaker and a shifty rookie, not to mention a gutsy and clever coach. But they are just the celebrities. What about our first-year kicker who set a team record with a game winning 61-yard field goal, the fleet-footed/sure-handed receivers, the three talented tight ends with one who used to be a college QB, the linebacker from Hawaii who was our kicker for a game, the athletic center, the replacement left tackle, the green hair of Jalen Mills, the blond tipped dreadlocks of Jay Ajayi. This team is like if Rocky and the Fresh Prince had a baby—tenacious and charismatic.

All year was like watching a party. Even when they lost, it was close. They never lost hope, never slowing down the inevitable momentum of 58 years, even with the devastating injuries. The ghosts of Jaworski, Cunningham and McNabb were exorcised by a guy from Austin, Texas who possessed the 4th quarter spirit necessary to make a city’s wish come true. My emotions after this game were cathartic jubilation. After the hail mary pass fell incomplete I screamed a few expletives, danced around my apartment and finally felt the pleasing taste of being a champion. I lost championships in pee-wee football; I lost championships in high school hockey. My closet was full of participation and 2nd place mini-trophies full of broken dreams and dust. If I couldn’t do it, at least let my pro teams do it! Yet, for more than three decades, sour defeat: Flyers lose 1997, 2010; Eagles lose 1981, 2005; Sixers lose 2001; Phillies lose 1993, 2009.

In previous years, after watching the Super Bowl, my mind would drift to the draft, who can we get from the colleges to bring us the big win. I would be full of angst, knowing there were seven long months before any more football, another chance to break the spell of losing.

Now, I have seven long months to bake, broil, roast and marinate in the feeling of finally being a championship city. The anxious waiting for September is missing, replaced by the fulfillment of a lifelong dream for all the fans from Philadelphia. 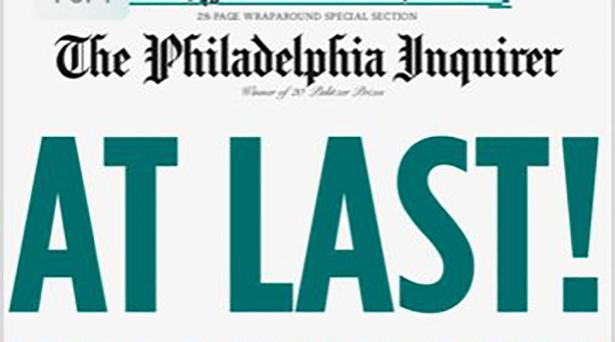