The Internet helps us keep up with trending topics such as Toronto mayor Rob Ford’s amazingly embarrassing but slightly humanizing descent into crack-smoking, drunken hilarity, awesome viral videos like JCVD doing badass splits on the side mirrors of two massive big rigs, and moral outrage through informative posts about gay bashing, dolphin killing or suffering in general. Sometimes there is a post that comes through the newsfeed on Facebook that touches me, or hurts me, or makes me LOL (:>) Sometimes it’s a dog and bird playing nicely together. Sometimes it’s a baby dancing. And sometimes it’s some random chick with a rifle posing with a majestic lion that she had recently killed for fun.

How is hunting fun? I’ve never understood it. I still say Ernest Hemingway is a sadistic twat for bragging about killing all those animals on safaris because it’s such a manly pursuit. I’ll bet he wore ivory cufflinks and ate black bear gall bladder to get a hard-on. I’ll bet he made his lovers lay on his tiger skin rugs and growl during coitus. I’ll bet he thought shark fin soup was delicious. He also loved the remarkably cold, callous art of bullfighting and often indulged in the adolescent adoration of binge drinking. He was a great writer with a laconic style of delivery and wrote candidly about his brutal experiences in life; but unfortunately, his honesty doesn’t save him from being full of bullshit machismo. Yes, he was in a terribly ugly war, and saw countless acts of courage, cruelty and brutality, but shouldn’t that make him want to avoid that type of behavior in the future? (And, to be fair, he owned some animals, famously, his promiscuous six-toed cat. And anyone who owns cats can’t be all bad.) Obviously, I’m speaking out of my arse right now, seeing as how I’ve never been in war, but I have killed things. I was a teenage boy once.

Before we get to me, let’s stay with Hemingway, the most famous hunter I know. So, he was a great killer of large animals. Do men destroy what we love, or do we love what we fear—and then shoot it with a gun? Either way, he hunted and fished for sport. His talent was prodigious. He caught a record 1200 pound marlin. He killed lions and elephants and rhinos. He had four wives he allegedly abused, a transsexual son and fought Germans in both World Wars. He had quite a life and was the original “Most Interesting Man in the World.” There are endless, amazing stories about him. But, despite all the thrills, chills and delights in his life. Despite his celebrity and his passion to survive through war, disease and plane crashes, he finally ended his life by hunting himself…with a rifle barrel in his mouth. It was a suitable, yet depressing end to a celebrated life.

I remember hunting in my backyard with my Red Ryder BB gun when I was but a wee lad and eyeing up a squirrel on a branch. I looked through the sights, adjusted for wind and fired. The squirrel fell out of the branch. His legs were flailing as he dropped. I went to check on him but he was gone. I imagine my air-powered fun-gun wasn’t enough to kill that ever so hardy species of brown tree squirrel, or so I hope. But, my overall feeling was one of guilt and displeasure. I wasn’t proud of my aim; I was disappointed in my desire. Why had I wanted to kill that little creature? What was the benefit to me or to the world? Was I aiming to kill out of instinct, out of masculine murderous lust, or because that’s what you do with a gun?

I burned ants with a magnifying glass. I poked dead birds with sticks. I tortured bugs and spiders by pulling off legs and wings. So, it wasn’t just a gun that made me aggressive and violent. Perhaps it is the testosterone inside me, forming the impetus that made me want to smash people’s faces into the ground when I played organized sports. Perhaps it was proving myself as stronger and larger than my tiny, prepubescent frame displayed me to be. Perhaps it was youthful energy without a sufficient or appropriate outlet. Perhaps it is just my composition. But, luckily, all my Martian ying was complemented by the Venutian yin. I outgrew those vibrations and found my Libra balance much later in life.

That balance could also be called hypocrisy. For, I hate violence toward all animals and people; however, I eat factory-farmed meat. I am well aware of the toll on the workers’ minds who are employed at these 21st century Matrix style consumptive plantations. I am well aware of the disgusting methods of storage and awful devices of death therein. So, why do I continue my carnivore ways? Because I want to eat meat. I want that taste, I crave it. I’m not ready to give up my selfish hypocrisy of decrying hunters for shooting animals for fun and implicitly accepting the suffering of other animals for my dietary benefit. I can be honest with myself by saying that if I had to chop off the head of a clucking hen, pluck it, disembowel it, separate the tasty parts and then cook it in oil, it’s safe to say I might never eat another buffalo wing. Since I am removed from the suffering, since I am far from the production line, I don’t see my food with a face. I see sustenance, vitamins and protein.

Maybe hunters, with a sufficient amount of determination and mercilessness, can look beyond the dark black eyes of those wild beasts, and beyond their own personal demons that led them to joy killing. Maybe they see trophies where conservationists see living beings in nature. Maybe since we are not the only carnivores on this Earth, and predators have the same right to eat as their prey, it is the natural way of things to kill.

Maybe it is my own sentimental anthropomorphism that feels too much for each pointless slaying of a big, beautiful cat or a gentle elephant. It seems that eating an animal at least satisfies a need, while hunting an animal satisfies a want. That crazy-eyed woman who posed with the dead lion has a website where she is posed with a slain crocodile, boar, zebra, bear and antelope among others. I couldn’t imagine why killing those animals is more exhilarating than watching it live, but she might have an answer for us.

I think the euphoric, stoked faces of humans posing with their lifeless prizes or the smug pride felt when wearing a fur jacket, or the superiority we get from daily meat consumption is desensitizing us to the pain of our animal companions. Or maybe, the truth lies in the opening quote of the film Fear and Loathing in Las Vegas by the aphoristic Dr. Johnson, which says: “He who makes a beast of himself, gets rid of the pain of being a man.” 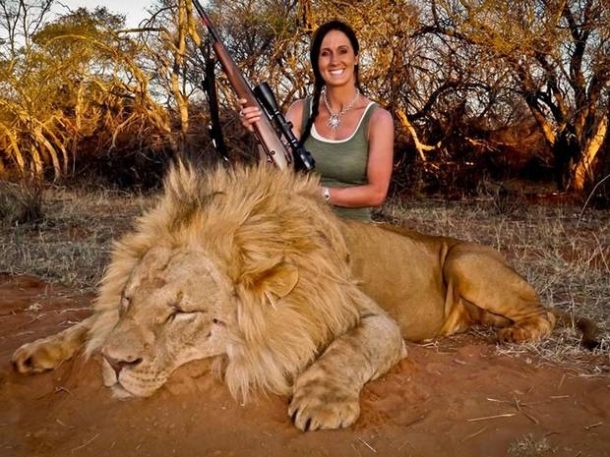 One thought on “Hunting, Hemingway and Eating Meat”