The always delicious, sometimes obfuscating gay rights fast food chain Chick-Fil-A had a slogan that read: “We didn’t invent the chicken sandwich, we just perfected it.” They are correct; their chicken clouds my thoughts some days knowing that a feast of crispy nuggets and hot sauce dripping, extra pickled, peanut oil fried chicken sandwiches are so far out of my reach. I love that restaurant. Waffle fries, when salted correctly, beat all other fried potatoes. I’d bet all my savings that despite their stance on homosexual relationships, there was a gay couple in a Chick-Fil-A the day after the news broke of their support against gay marriage, sitting in a corner booth, guiltily scarfing down fried yard bird saying to each other: “Getting married isn’t THAT important, is it?”

All chicken aside, I believe the USA could have a similar slogan to illustrate their collective history as a 237-year-old nation: “We didn’t invent gun violence, we just perfected it.” America loves guns more than any fried food, including Twinkies, Oreo’s or butter. Our media reports it daily, our movies glorify its power, our military uses them with devastating efficacy and our major cities are polluted with their influence. We all know the news of last December in Newtown, of last summer in Denver, of Virginia Tech, Columbine and so on. There is gun violence all over the world, but it seems the “New World” has the most frightful statistics of late. There are the known offenders of Brazil, Venezuela, Colombia, Mexico and, of course, USA.

Africa is still the world leader of total murders; however, the majority of those murders are not GUN murders. More likely machete or strangling, who knows? I don’t claim to understand much about that large, intimidating continent, besides, it’s not like Africa is looked to as a stable continent in the forefront of civil rights and world peace. Yet, I doubt America is either anymore. How could we be? We’ve been involved in so many wars and skirmishes and interventions and secret bombings and coups and overthrows that the world may well see us as a hindrance instead of a helper.

American foreign policy is well known to be destructively self-interested, and that’s great, if you’re an American. Other countries and other innocent people have not fared so well. I’m digressing only to show how our obsession with guns led to the overarching, omnipresent military industrial complex that we find ourselves so firmly rooted to today.

Americans must share in this blame. Americans are on TV expounding the virtues of a well-armed populace. There are those worried about some futuristic dystopia where Americans follow the helpless (read: GUNless) citizens of Cambodia or USSR and are taken hostage by a tyrannical government hell-bent on enslaving its own populace to toil in the desolate coal mines of West Virginia and oil fields of now treeless and lifeless Alaska to power the thought police helicopters that report to King Obama.

As if a ragtag band of bearded, underwear recycling, soup can stockpiling Doomsday Preppers would be able to take on the most efficient and proficient army of the modern world because they were able to express their 2nd Amendment rights to own a few handguns and an AR-15. It’s a flawed argument that we need armaments to protect ourselves from our own government.

Another flawed argument is the old: “Guns don’t kill people, people do.” That didactically silly idea stops as soon as you accept that sometimes a gun misfires, is dropped and goes off, an errant drive-by gunshot kills a pedestrian or a gun is mistakenly thought to be unloaded. Guns kill people much easier than knives. People are required to operate them, and humans make errors.

So, what is it about America and the serial killers, the gun obsessions, the self-defense theories, and the 2nd Amendment proselytizing? We were born through revolt is the easy answer. But, I think it’s more ego based. I think America likes being the dangerous place it is. I think it is in our national character to tolerate killing because we have been exposed to and justified it for so long in our politics, cities and our lives.

We have over 13,000 murders a year. We have political assassinations, televised suicides, murder/suicides, death penalty, DUI manslaughters, as well as the seven major wars of the last 100 years. Death is all around us, as it is in any country, but somehow America reacts differently. We are sad and preachy to ease the pain, and then when someone suggests change to prevent another tragedy, there is uproar. What are we hiding? Who are we protecting? The NRA is the scapegoat of liberals, but they, like any other group in a capitalistic society is guarding the bottom line. It just so happens that their bottom line is soaked in blood, whereas somebody like the pharmaceuticals bottom line is doused in overmedicated mental illness and depressed teenagers on Prozac.

Why don’t we look for an answer with our greatest natural resource: Hollywood. Our last ten best picture winners: 5 of the last 10 have featured guns in major roles, and besides The Artist, The King’s Speech (during a World War) and Slumdog Millionaire (set in a very dangerous place), the other two were violent—with a female boxer dying and a Middle Earth war. Violence is sexier than sex sometimes—if sexy can mean attractive and interesting. It’s at least more tolerated than sex. TV and movies don’t have to edit out the atrocities of death, but damned if a nipple slips at halftime or a thong is shown during primetime!

Even our comedies have guns: Dumb and Dumber, “Harry, you’re alive! And you’re a terrible shot.” Our favorite childhood movies: The Goonies—the Fratellis have a gun in almost every scene, (although the guns are more props to show they’re bad guys.) Even romantic comedies can sometimes work a little gun violence into the mix: The Bodyguard, Whitney was targeted by a stalker with a gun disguised as a camera.

Also, it seems that all our futuristic movies involve guns. It’s like we can’t even imagine a future where there are none. Even Demolition Man, where there was a leader crazy enough to completely outlaw guns, thereby turning everyone into calm law-abiding citizens eating Taco Bell and never cursing; it turned out he was actually crazy and purposely allowed a gun-loving criminal and a gun-loving cop to blow that peaceful world up with a few leftover guns from the museum. Even the imaginative, inspired writers of southern California can’t create a world where gun violence doesn’t exist. In the 21st century, we look to our celebrities for guidance, and if they’re all firing guns and surviving to Live Free and Die Hard again, or surviving a Skyfall and multiple gun attacks, then why can’t we?

More gun legislation probably won’t help. It’s not like we pass a law and all the crazies and baddies will show up like Kevin Spacey in Se7en and turn themselves in to the authorities with bloody hands and admit they were wrong. The 2nd Amendment protects our right to have guns, but if we’re going to get all Constitutional, let’s let the 1st Amendment out of the bag also and get some real free speech and real freedom of assembly.

Don’t push away those Occupy Wall Street people because they don’t fit Wall Street’s greedy, insatiable agenda. Let the naked poets sing, let the NC-17 movies play; let the freedom of speech extend as far as we can take it. If you want no limits to what kinds of guns/ammo you can own including the maddeningly idiotic armor-piercing bullets, then let’s have no limits on the other great freedoms.

Allow a mosque in lower Manhattan, nudity on television, or protests by the insane and hopeless Westboro Baptist Church or the KKK. I think you can see the slippery slope of either more or less legislation. Those wise old White men who created America did a good job, but it is a different world now. Perhaps it’s better to have no naked chicks kissing on the channel opposite SpongeBob. Perhaps it’s better to keep religion in neutral areas where there wasn’t a massacre (tell that to any Native American tribe :/). Perhaps it’s not a bad thing to limit ultra-effective killing machines and metal penetrating ammunition also.

America is a great country, a violent, hypocritical, generous, diverse country. We produce amazing people and products. We lead the world in many ways. Our goal in the future should be to lead the way to peace. The old Roman expression: “If you want peace, prepare for war” is apropos for this argument. We are certainly prepared for war, so perhaps peace is on the way. It most assuredly will have to start in the Homeland. 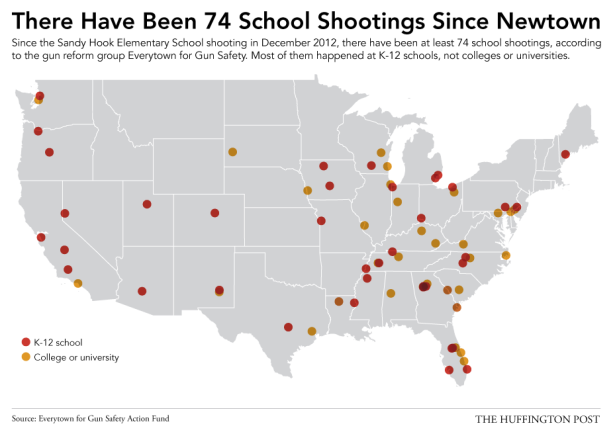 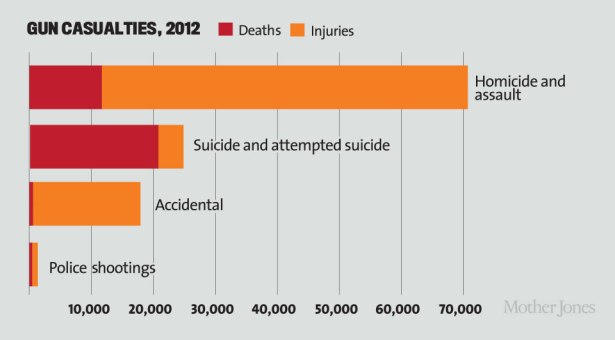 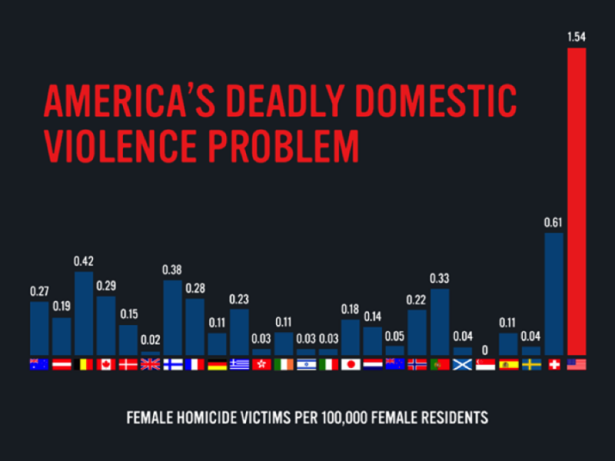 One thought on “UGH, Guns.”