I was raised in churches hearing sermons about how forgiveness is divine and God will always let you off the hook if you’re sorry. Yet, God heavily punished both those who were pious and sacrilegious in the Bible (ask Job or the Sodomites). This issue has less to do with God and more with human error; however, I bring up the grand deity to invoke the idea of forgiving those who have wronged others. I forgive Mike Vick.

I believe he regrets engaging pitbulls in deadly combat, which led to his incarceration and almost ruined his NFL career. I also believe if it were legal, he would still be doing it. I believe that he doesn’t think it’s wrong to fight dogs to the pain of death for gambling purposes. I believe his self-motivated interests, which led him to dogfighting in the beginning, are the very same ones which prevent him from re-visiting his death cage matches again.

He doesn’t regret killing, torturing, hurting and punishing innocent dogs. He regrets getting caught. He was picked up by my hometown football team–the Philadelphia Eagles. The city where many famous athletes have come to die. But, he has flourished where many others have floundered. I don’t know how the fans are reacting to him, or if they support him just because he can bring some wins to the team, nevertheless, he is the starter.

We, as a sports nation, have forgiven spousal abuse, rape, gun or drug possession and assault among others. Jason Kidd, Mike Tyson, Plaxico Burress and Ben Roethlisberger have been vilified, suspended and then their charges seem to be forgotten under the guise of late night punchlines. I get it, those charges are against humans, those athletes hurt other people and there are two sides to every story. I’m not saying they’re not guilty, but, they are punished and the defendants can move on with their lives, albeit scarred.

Every person has the will to place themselves in any given situation. Kidd’s wife can divorce him, Tyson’s victim could’ve decided not to follow to his hotel room, Burress could have not brought a gun to a club, and Roethlisberger’s victim could’ve called the bouncer the minute he became inappropriate.  I’m not casting aspersions that every victim is to blame, yet they are human and capable of thought and action. The dogs that Vick acquired for battle were chained and held and tortured until fight-time.

They were probably puppies and pathetic little heaps of fur and slobber needing loving and caring. He turned them into monsters for sport, for show, for a bet. He made the holding cages at his home look very respectable so that the authorities would think it was just a high end kennel. He was deceptive, he was ludicrously arrogant, he acted despicably and he caused pain to animals needlessly.

Vick is from the bad part of Newport News, VA. Mike Tyson was raised in the ghetto of NYC. Vick tortured dogs. Tyson raised pigeons. Upbringing is no excuse for these actions.  Vick made more money than he could spend. He spent it horribly. He could have started a charity football league in his poor old neighborhood. Having too much disposable income is no excuse.

At this link: http://www.nflplayers.com/About-Us/Community/NFL-Players-Charities/ you can find how many players contribute positively to their communities.

I admit my bias in this situation. I love animals. I hate to see pain in the human world or the animal world. I also understand it’s part of life. Gambling on the lives of dogs is not part of life. There are plenty of other things to bet on Michael Vick. Bet on boxing, horse races, roulette tables or whether or not it’ll rain. I shouldn’t tell you how to live. I am telling you I disagree with what you did. I despise what you did. I forgive you, and hope you realize the implications of your actions. Now, let’s get you in a cage with some of the pitbulls you tortured and see how tough you made those dogs. 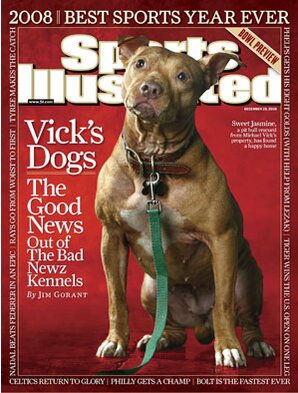